Life at the top is lonely. Especially for those born with a diamond spoon in their mouth. The economic mismatch limits their options of friends in their childhood. They are stuck with a handful of those who match their financial status. Which is unfortunate. For mankind predominantly consists of a colorful mainstream. A life devoid of an opportunity to immerse in the true colors of the human race is incomplete.

1995. My first exposure to one of India’s oldest and largest conglomerates―The Bajaj Group―was when I returned to India after my 7-year US stint. I was trying to settle down in Ahmedabad, and was failing miserably. Hence, when I received an interview call from Bajaj Auto, I jumped at the opportunity and caught the overnight bus to Pune. The bus reached late. My father-in-law picked me up from the bus stand. I hurriedly headed for the interview all shabbily dressed, hair ruffled up. For some reason, they rejected me. So I joined an Internet start–up and learned the tricks of the trade, which eventually led to the birth of Cybage.

It was a good thing I didn’t get selected on that fateful day. Because things and beings in our life unfold for a reason. Had Bajaj Auto hired me, the iconic family’s scion―Sanjiv Bajaj―would have entered my life as a boss, and not as a personal friend. Well, as ‘personal’ as a tycoon can get with a commoner…

2010. It took fifteen years of climbing before I could glimpse abodes where the likes of Sanjiv Bajaj dwelled. I don’t remember who introduced us. Sanjiv was a prize catch. Our chemistry was compatible, both introverts and unsexy. Facebook, WhatsApp, wild parties, boy night-outs, branded wardrobes, social flamboyance, and general ‘fun’ public displays didn’t do much for us. Our reserved demeanor ensured that our bonding evolved at a snail’s pace. Thankfully, the wives clicked, and we kept bumping into each other on the social circuit. The reciprocal dinners followed. In due course, Sanjiv made it a point to honor Cybage’s annual bash invites.

Still, Sanjiv remained an enigma. While both of us carried an entrepreneurial zest, the professional similarities ended there. Sure, Cybage enjoyed local hero status, with sporadic national media splashes. But Bajaj Finserv group companies were playing a different ball game―with Sanjiv busy adorning the front page of Forbes Magazine, receiving E&Y’s ‘Entrepreneur of the Year’ award and rubbing shoulders with global business leaders at the Davos World Economic Forum. And why not! How many industry scions take over a family business unit of 500M Dollar market cap, and catapult it to a staggering 20B Dollar empire in less than a decade?

The world is fascinated by rags-to-riches stories. We are inspired by the go-getter attitude of those who rise from the ground. We forget that the fighting spirit comes natural to first-generation heroes because their back is against the wall. We often overlook the accomplishments of nth generation entrepreneurs who choose to dedicate their prime years building new business models, rather than enjoying the spoils of their family wealth. There is something to be said about the commanders who have the courage to lead on the battlefield without having prior battle scars! Sanjiv Bajaj was one such enigmatic commander I wanted to understand more. 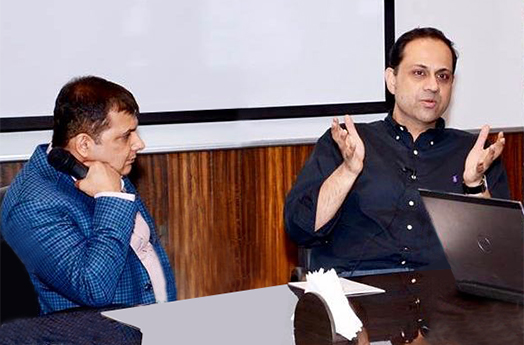 2017. It took seven years and a public setting to get to know Sanjiv’s intimate side in less than an hour! On Feb 18, I was requested to moderate a coffee session with him for the young business leaders of Pune in Cybage boardroom.  Our good rapport made the interaction a breeze, with lots of humor, applause, and enlightenment. We covered a great deal―from his phenomenal arrival on the corporate stage, to the number of zeroes in his balance sheets. From people vs. process tradeoffs, the top- vs. bottom-line ropewalk, to disruptive innovation vs. lean business models. And just when his guard was down and the moment was opportune, I laid out the bait, “Tell us all about your boarding schools in Switzerland and the Mercedes models that ferried you to school.”

Sanjiv laughed and replied, “My siblings Rajiv & Sunaina and I used to catch a bus every morning and go to the same local convent school as the children of all other Bajaj employees. Once we missed our school bus, and our mom arranged a car to drop us. We were elated. The next day, we intentionally missed our bus, and again rode in our car. This continued for a week. Till Dad figured out. So the following morning, after missing our bus, we discovered there was no car available. Dad forced us to walk down to school. The school was very strict when it came to timings, and it was greatly embarrassing to reach thirty minutes late. That was the end of our bus-bunking stint.”

Sanjiv’s unexpected reply left the audience dazed. While many wealthy families strive to expose their offspring to the real world, Bajaj household has walked the talk. The second half was packed with several revealing peeps―Sanjiv’s undergrad at the Government College of Engineering Pune and his courtship days with his fiancée, where he would train travel to Mumbai to meet her every alternate weekend and return on Monday morning to directly report on the shop floor of Tata Motors.

My maze cleared with each passing question. I had all the answers. Still I decided to take one last shot to reconfirm the verdict, “Isn’t life at the top lonely? Who guides you through business stresses?” Sanjiv replied without hesitation, “Bajaj executives and employees are my support system, they are my best advisors and peers.”

The interview was over. There was nothing left to ask. My hypothesis had crashed. Had I received the job offer on that fateful day in 1995, I would have still gained a friend, and not a boss. It is an incorrect generalization that those born with a diamond spoon find it difficult to connect with the mainstream. For every now and then, the challenge is on the exact reverse side!   Do you agree?