Today is Cybage’s Silver Jubilee Anniversary.  It has been a remarkable voyage that has left tens of thousands of footprints on the sands of time.  Yet, strangely, it feels as if the voyagers never left home!  How is that possible?  Well, here is how the story goes…

Dream.  A wanderer arrived at the dwelling of a sage on the outskirts of a big desert.  “O Sage,” the wanderer probed, “I am a seeker of the heaven.  Please guide me toward my goal.”  It was twilight hour; the stars were just beginning to shine.  The sage instructed, “See that Orion constellation in the eastern part of the sky?  Travel through the night in that direction.  And as the day breaks, you will find your heaven.”  The seeker immediately set out.  He followed the direction of the constellation with head tilted up—marveling at the Milky Way while making mental notes of star positions.

Elsewhere, a quarter century ago, a tiny startup began its own exploration with eyes up in the sky—an IP-led grand idea that it believed would revolutionize how users browsed the World Wide Web.  Even during that early hour of the Internet era, the skies were packed with star constellations of dotcom unicorns.  Each constellation aspiring to own the heavens—big brands raising billion-dollar funds, IPOs, mergers, acquisitions, etc.  Little Cybage watched all of it with dreamy eyes, with no original identity, yet aspiring to be one of the heavenly stars the entire planet would admire.

Lost.  Closer to the wee hours, as the stars began to fade, the seeker realized something had gone amiss.  The sun was rising from a different direction than the one he was headed to.  As the planet rotated, the group of stars he had been following had gradually shifted.  Other than the Polar Star on the horizon, the entire map of the sky had transformed.  As the day broke, the seeker found himself surrounded by endless sand dunes.  The sordid place was a far cry from the heaven he was seeking.  The seeker staggered listlessly in the desert heat.  The water in his flask had run out and he was alarmingly dehydrated.

It didn’t take long before Little Cybage realized that chasing stars was an expedition in an illusion.  The face of the Internet was rapidly changing—the old stars were fading away and getting replaced by new ones.  Its grand idea had no takers—the tiny startup was confused and lost with no one to seek directions from.  When even the big and mighty were getting trampled who was to think about Little Cybage’s whimpering.  It’s existence overnight was reduced to feel like a “candle in the wind, never knowing who to cling to when the rain set in.”  It was cold and shivery with the sun still refusing to rise from any direction.

Hope.  Moments before collapsing, the seeker came across a deserted hut.  Inside, he discovered a water pump with a piping that ran into the ground.  He tried to pump the water, but the handle of the pump barely moved.  He could feel the friction against the piping beneath the ground.  As he was about to give up, he noticed a corked bottle of water lying nearby.  Excited, he rushed to gulp the water but stopped short when he spotted a note stuck to the bottle—”Drain this water around the piping, it will loosen the sand that has crept in and the pump will operate again.”

Surrounded by vast nothingness with demoted ambitions, Little Cybage started soliciting suitors to buyout the product of its dreams at a liquidated valuation.  The desperate act was to salvage whatever it could before pulling down the shutters.  This was followed by the countless days of travel leading into 10-minute meetings.  Rest of the time were spent in straining eyes through the thick fog until one day, Little Cybage finally caught a glimpse of tiny ray of hope.  With the growing maturity of the Internet, the sparks of offshore software services had started glimmering.

Success.  The seeker was in a dilemma—whether to quench his thirst with the bottled water or take the risk of pouring it down the piping hoping it would start the water pump.  He picked the risky option.  Fortunately, as the note promised, the pump cranked up.  He proceeded to satiate his thirst with fresh water and silently thanked the faceless angel who had left the water bottle with instructions.  Moved by the gesture of an unknown co-traveler, he refilled the water into the bottle and stuck back the note.  Exhausted with the night-long travel, he decided to rest there.

Little Cybage had two options:  a) Play safe till the product was liquidated or b) Take the risk of using the product as a branding tool in the hope of capturing services business.  Then something beautiful transpired.  The first-generation employees emboldened Little Cybage.  They selflessly put on hold the pursuit of their own overseas dreams and gifted their company some precious time for transitioning into services business.  Their conviction was reinforced by early customers who took a leap of faith in a provider gasping for survival.  And that’s how Little Cybage took its first breath.

Home.  After sunset, the seeker set out again.  Except, this time he didn’t follow the star constellations.  Instead, he built his navigation around the Polar Star in the horizon and made his way back to where he had come from, only to find the smiling sage waiting for him!  He folded his hands in deep gratitude for his expedition of discovery—“The heavens are not up in the astral bodies of sky, instead they reside in human bonds on earth.”

Little Cybage realized that it is not necessary for spectacular journeys to draw inspiration from the zillion stars up in the sky.  Because sometimes a meaningful journey is one that goes down to the roots.  All it needs is eyes on the terrain and the willingness to connect to the polar stars – each lone star represents a real person.  For generosity of human spirit and fairness in dealings quench an organization’s soul. This is based on the thought “What one gives is what one takes!” 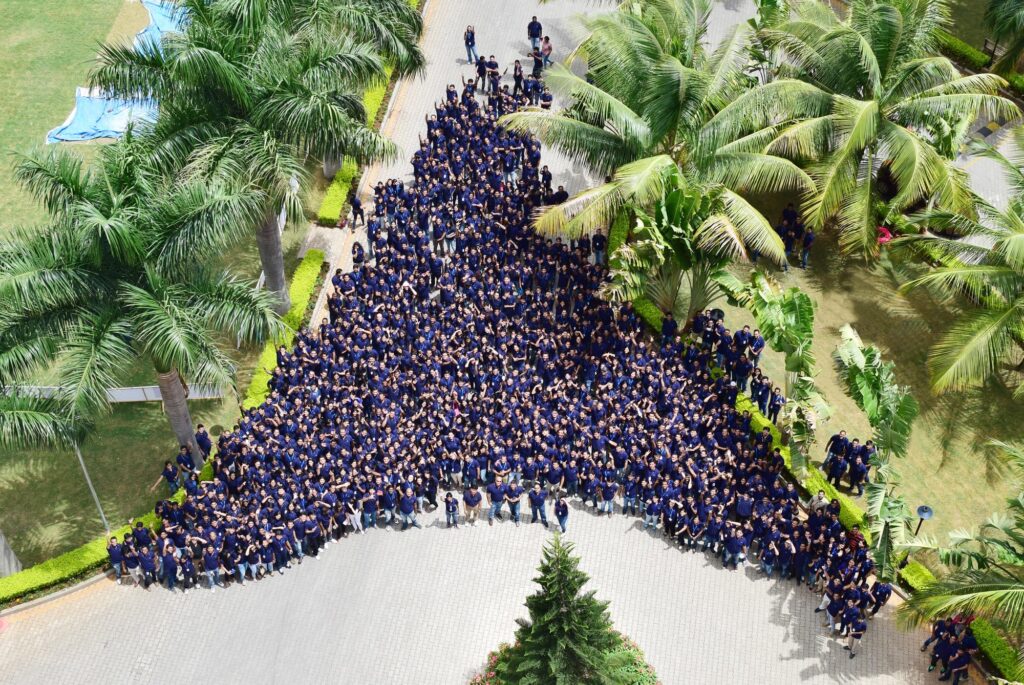 Happily Ever After.  The above beliefs have nurtured Cybage’s identity for two and a half decades as generations of employees and customers have kept bringing their “Life to Work”.  Together, these steady stars have coached a brick-and-mortar company to listen to the rhythmic sounds of heartbeats, and in the process have given HER a breathing identity.  And for that, today on her milestone 25th birthday she stands with humility and pride in front of all her co-travelers with hands folded in gratitude—

“Thank you for gifting me glimpses of heaven and for decorating my life as Taare Zameen Par!”