I Loved Her First

Father of the Bride…

A little while ago, I went through something I had pictured in my mind forever… walking down the aisle with my daughter!  Now those moments are over. Just like that. 25 years of imagination, over in 5 minutes. And yet for those few minutes, it felt like time had stood still.  With each step, my heart swelled with pride but my chest sank with heaviness. It’s like we were walking amongst everyone we love, yet were alone in the journey, which spanned her lifetime and half of mine. “You will cry buckets when I get married,” she had repeatedly warned me over the years. But today, she was quiet.  It was my turn to talk.  So, what did I say to her in those few steps?  Wait, first, let’s retrace steps all the way.

I was amongst the first ones to welcome Mishu. She was as soft and as pretty as a doll can be. Then, while she was still a baby, I left for a long journey to America. By the time I returned, I was a stranger to her. Yet it took only a few moments for her to come back giggling, burping, and cuddling into my arms. And ever since, my role has been twirling around her little finger while Ritu’s has been parenting. From nurturing and raising Baby Mishu to making these arrangements for Bride Misha, it has all been Ritu. And all the silly stuff has been me.

Like when Mishu turned into a little princess, I would tuck her and Aneesh into bed every night.  The three of us would play a game where we would end up with a random animal each.  And then, I would weave a story around the selected animals. The kids thought I was a wizard.  Somewhere in those stories they grew up, and I don’t remember when those magical nights stopped. All I remember is  that somehow the roles reversed, and Mishu started narrating me stories about  a wizard named Harry Potter. She also danced, debated, acted, sang, and played the piano. From being a little girl against a pink pillow, gazing at her dad with wonder in her eyes, she was now in the midst of stage lights where many others gazed at her in wonder. One of them was Rushabh. Of course, I didn’t know about it then.

Then one fine day, she grew up a little more. The girl who held our family like glue moved to the other side of the planet for studies. Our home felt lonely.  We missed her, and she missed us, family, friends, and our dog, Lester. Then Lester died. Mishu was devastated. Rushabh saw his opening to reconnect, and that’s when I realized this was getting serious. “Are you in love?” I summoned Mishu. “Yes Papa,” she said nervously.  “In that case,” I told her, “Love is like breathing; never give up!” But, I knew that just being in love was not good enough. There is one thing more important than love, and I wanted to see that one thing for myself.  And I saw it soon… in Rushabh’s eyes… the softness and the kindness with which he gazed at Mishu.

I finally asked Mishu to reconfirm “Does he give you peace?” “Yes, Papa… When I am with him, I am myself; there is no baggage”. And I knew my daughter had made the right decision. For fairy tales unfold where two things co-exist; one is love, and the other, peace. And I have seen that marvel in their relationship—where both of them have continued to maintain their strong identity – one headed for Harvard, one for MIT – and yet their hearts beat as one. Their bonding is infectious – the way Rushabh’s parents pamper and dote upon Mishu like the apple of their eyes. And when did I realize Rushabh is family? When fights started breaking out for a slot, as most family board games have an upper cap of 4 players! His frequent barging into our bedroom, no different than Aneesh’s. Including once at midnight when he charged in, to ask our permission for our daughter’s hand and then scheme with us to plan a surprise proposal for Mishu. 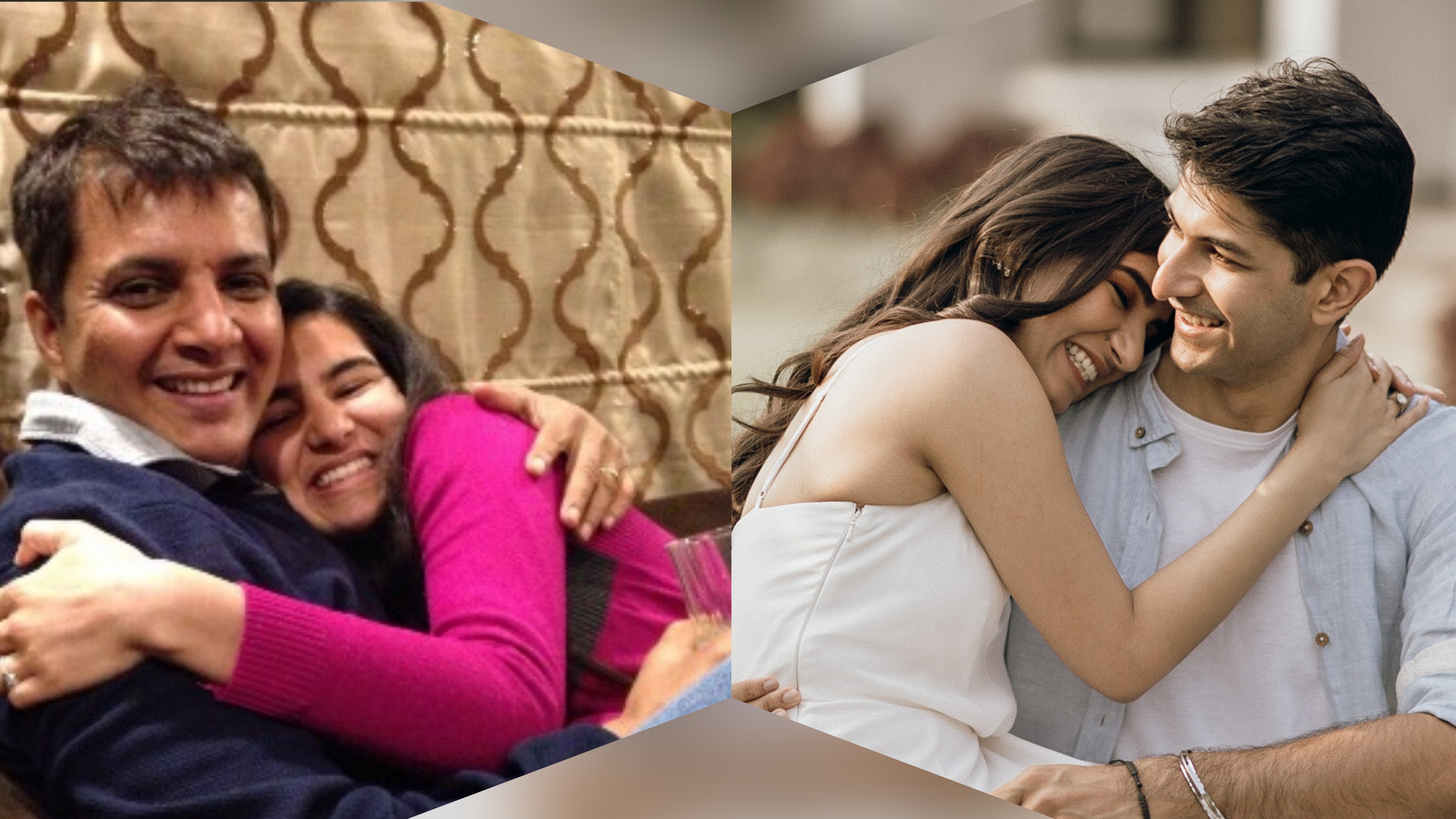 And today, we saw the closure of that proposal as I walked down the precious piece of my heart to merge with the precious piece of her heart.  Mishu was clear – only Dad would walk me down the aisle. This straight walk was her most important turning point in life, and I wanted to gift her something befitting. So, what did I say to Mishu? Well, I told her a story after a long time. Except this time, I was not kissing her goodnight but more like bidding her a good life.  I reminded her about an incident. I had to get the kids dressed for bed before our story time because Ritu was running late from her dental practice that day. As we were getting dressed, I came up with the brilliant idea of throwing the clothes on the ceiling fan. Once all of them were up, I turned on the fan. The fan wobbled wildly, and the clothes went flying around. And at that exact moment, Ritu chose to make her grand entry. What followed was hiding, screaming, laughing, panic, as Ritu just stood there in horror watching her half-naked family under the wobbling fan that looked so ready to crash.

Those were priceless moments, I refreshed Mishu’s memory. Just like the wobbling fan hurling stuff around, family life wobbles too. Things often fall out of place, but that doesn’t mean we need to dilute our zest and the love that binds families. There is nothing more meaningful than meaningless laughter with those who make you complete, even if that completeness feels like emptiness when you reach the end of the road.  How I wish the walk to the wedding altar was a little longer!

It’s incredibly tough to let go of someone who once giggled, burped, and cuddled in your arms.  But that’s no reason for a bucket of tears. For today is also the dawn of a wonderful era, one marked with the gift of an amazing son, uniting of two families, and blessings of so many beautiful hearts. Hopefully, in a few years from now, my magical storytelling nights and Ritu’s nurturing skills will make a comeback. And such lovely dreams are to be celebrated with dance, not tears. So, Rushabh, I am going to make you wait for your first dance just a little longer. Do you know why? Because I loved her first!